Here is a keynote talk I gave at the Cloud Idenity Summit - I gave the talk awhile back but these topics keep coming up and thought it would be good to share.

A good operating principle for any new technology is "eat what you kill", its been said that when it came out Apple's iPhone did not destroy competitors, it paved over whole segments - portable music players, GPS, PDAs, digital cameras, and more were all thriving multi billion dollar industry segments in their own right until they got subsumed into the iPhone.

If we take the position that identity is the new corporate perimeter, then what is it replacing and how should we proceed?

The perimeter was the DMZ. Good stuff inside the perimeter on the server and outside? Well all bets are off. Unfortunately, over time the quality of protection of the DMZ degraded.

I'd like to begin not by burying the DMZ but to praise it, and ask, what did it, in fact, get right? There is a good list of things the DMZ did well that we can learn from as our security architecture evolves:

The DMZ was a defined zone where in Marcus Ranum's words the normal rules did not apply. In addition, its the one area in the software architecture where things were deliberately taken away rather than added, that's a win for security.

However, while the DMZ gave us a structural perimeter, the boundary that really matter is around data access. The data and users longs since diverged from the DMZ structure. That means in turn that our perimeter goes from a structural perimeter to a more behavioral perimeter. The authentication, session management, data protection and other security services have to adhere more to the user, the transactions, and the data. /home is where the data is.

As applications move to mobile how do we process a security architecture that means we are now delivering code, not just data as in the web model? How to account for co-resident malicious applications and lack of control below the stack at the platform level? The DMZ was never designed for these scenarios. I suggest a better model for today's clients is to play by Moscow Rules.

Moscow Rules fixes the limitations of the DMZ model, the idea from the Cold war spy novels is a set of guidelines for agents operating in enemy territory. Since you are behind enemy lines, you do not assume isolation like the DMZ does.
The Moscow Rules operating principles are quite instructive for Mobile Application Security. Starting with
"Play it by the book." If you are working with remote agents in hostile territory, you want to minimize room for error - procedures, guidelines, and standards matter.
"Assume nothing" - is the client device rooted? Is it lost or stolen? What else is running locally? Did the developers implement correctly? There is a very long list of assumptions that people make about the efficacy that they cannot and will not be able to make about client operating ecosystems that mobile apps execute in. Turning towards software security architecture, the question to address then becomes as Brian Snow said - if we cannot trust, how can we safely use?
"Murphy's Law" - design for failure
"Everyone is potentially under opposition control" - its not just about delivering data to a client and protecting the server side. More to the point, systems have to be resilient in the face of intelligently patched and programmed client applications that can be turned back against the system. A common design pattern for services is to build the client using the emissary pattern - what software security designers need to cope with is hostile emissaries. Code, method, keys, channels, that the emissary has access to can and will be bent and turned back on the server, the system and its users.
"You are never completely alone" - any time you work on a mobile development project you focus on your app, its natural. But your app lives alongside Angry Birds and many dozens of other app of unknown provenance. What happens to the identity tokens you gave to the mobile device?
"Never carry objects unless they be immediately discarded/destroyed" - web developers mostly needed to care about passwords, data, and session tokens. Mobile apps have a lot more than that. Plus they have a full execution lifecycle. For example, you are doing a sensitive operation on your app and a phone call comes in and suspends? What does your app do with the session and the data when it comes back up? How does your app manage and protect its cache, storage and memory?
So how should software security architects proceed using Moscow rules instead of just DMZ? I think the starting point is integration
"Normally, everything is split up and problems are solved separately. That makes individual problems easy to solve, but the connections between the problems become very complicated, and something simple ends up in a real mess. If you integrate it in the first place, that turns out to be the most simple solution. You have to think ahead and you must always expect the unexpected.”
- Jan Benthem, Schipol airport chief architect

Protocols should be designed an implemented looking at the whole access control chain and chain of responsibilities. Mobile apps cannot deliver a full solution, consequently the API and server side matters a lot. Applications may in fact be servers since Mobile middle tiers send push notifications, texts and other updates down to the "clients". In short we need to go back and fully refresh the playbook of security protocols not just extend and pretend mobile is just another client, a web browser cooler hardware. Its a new way of interacting with users, servers and data.

At the same time, we have to make things simple for users and developers. 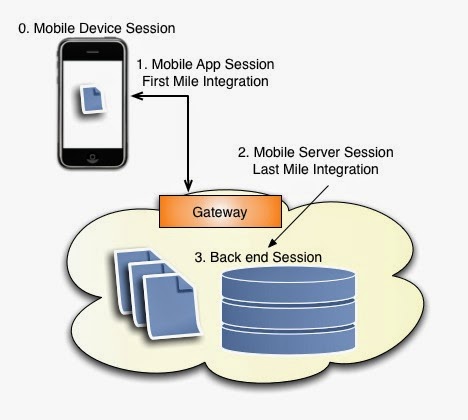 Many of the DMZ guidelines do still apply, attack surface should be reduced, simple, centralized policy enforcement points add value. Normal rules should not apply to perimeters.

Where the biggest distinction lies is the DMZ assumes a separation that no longer exists and that's where security integration patterns need to be worked and fielded to defend mobile apps, assuming not isolation and security but rather usage in actively hostile environments.
Posted by gunnar at 4:55 PM No comments: